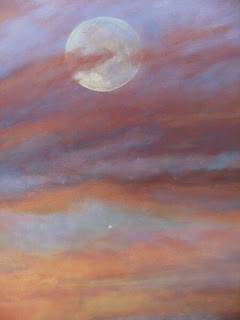 This is a detail from a large mural created for the St. Mary's Hospital Cancer Clinic in Walla Walla, Washington. The mural was a landscape based on a particular foothills canyon near the city. I chose to depict the early dawn hour when the moon is still visible--as is the evening star, seen here in the bluish-greenish patch of sky below the moon. Besides being peaceful, that time of day symbolized hope in the beginning of a new day. I "hid" all kinds of animals and birds in this mural for patients to discover while they were receiving radiation treatment.

I used commercial grade oil-based paints (durable, washable, scrubbable.) Because the wall was in a fully functioning clinic, I could only work on it between the hours of 7:00 p.m. and 3:00 a.m. (which allowed for the air to completely exchange with fresh air before the clinic opened.
Posted by C S Poppenga at 7:29 PM No comments:

Email ThisBlogThis!Share to TwitterShare to FacebookShare to Pinterest
Labels: Moon at Daybreak 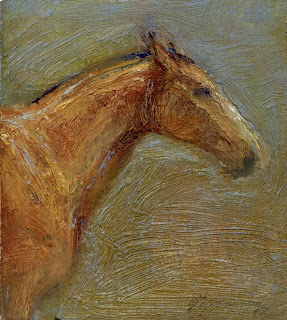 "The Sorrel Mare" was inspired by several horses near my studio and one in particular that would only stand broadside to me at the fence. Very aloof, very ancient. I took that as the starting point for this small intimate work.

Small amounts of beeswax and thick paint applied with brush. Final touches included color scumbles over the high points of the paint surface (for example, the blue cast over the primarily greenish background.

"The Sorrel Mare" measures 3 3/4 inch by 3 inch. This painting is included in the portfolio presentation that appears in the red square at the bottom of this blog.

Email ThisBlogThis!Share to TwitterShare to FacebookShare to Pinterest
Labels: "The Sorrel Mare" 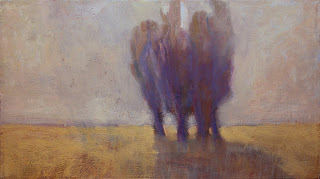 "Sun Dogs" is an oil on stretched canvas painting of a small cluster of poplar trees bathed in yellow light. I was more interested in creating texture and having fun with color layers over layers in a scumble (dry-brush) that allows flecks of each color to remain pure beside its neighboring color specks.
Posted by C S Poppenga at 3:31 AM 1 comment:

Commercial Art is always there 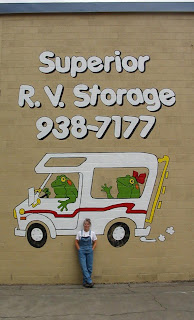 I've always done commercial work including a plenty of signs, some complex and painterly while others are simplistic and direct to the point (like the one shown here.) Yes, I invent and paint the lettering too.

The sign for Superior R.V. Storage is in Milton-Freewater, Oregon. I had started a frog craze there with window paintings of my original cartoon frogs depicted doing things somehow related to the business on whose window any particular frog appeared. I did this for several years, in conjunction with the Muddy-Frogwater Festival until the city manager high-jacked my concept. Sad but true, idea high-jacking happens a lot to artists and especially to those involved in the creation of commercial art. Still, I continue to create signs and other commercial art (posters, t-shirt designs, logos, etc.) and find it a pleasant break from the studio work.

Besides the sign shown here, I created two more large-scale permanent "frog" signs. The number of original cartoon frog art I created on windows numbered over 100 total individual works. Some businesses liked the work so well they left it up for years. I used high quality paint and proper technique so the window art lasted several years in good condition even though it was constantly exposed to the weather.
Posted by C S Poppenga at 8:52 PM No comments: 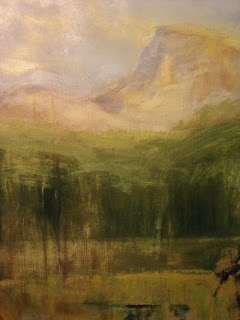 This untitled painting was intended to be a study for a larger work (I'll call it "Eagle Cap Mountain - Study" for this blog entry.)
Once this study reached the state shown here, it possessed the qualities that I desired to reaccomplish in a larger work to come. As with most of my studio work, I personally prefer the "unpolished" studies to the later works such studies often lead to. I'm interested in the spontaneous feel the study achieves --- or maybe, more accurately, the "presence" of air and light resulting from translucent layers of paint which I build up over several painting sessions.
(Eagle Cap Mountain is in the Eagle Cap Wilderness in eastern Oregon -- an area I've hiked/camped in many times. The suggestion of a body of water in the middle ground represents Mirror Lake.)
Posted by C S Poppenga at 4:39 PM No comments:

Email ThisBlogThis!Share to TwitterShare to FacebookShare to Pinterest
Labels: When does a study become a painting?
Newer Posts Older Posts Home
Subscribe to: Posts (Atom)