The Owl & The Pussycat

Hard to believe that it has been over a month since I last posted an entry here. I've been way too busy with the work I do as a visiting artist in the rural schools here in central Montana. I also had several things to do at the studio, including trying to re-create some work that was damaged beyond repair by the studio cat. I resisted "damaging" the cat and tossing her outside. What she did and the resulting mess is best described as the "cat attack" and any further explanation is another post, which will have to wait until sometime after I'm through being angry over it.
But on a happier note, the cat-created mess led me to rearrange, reorganize my studio space and that has proved to be a good thing. To keep this post on the upbeat, I'm including an oil sketch for a painting that will take form sometime after I recreate the ones destroyed by the cat attack. This is a fun take on the Edward Lear poem "The Owl and The Pussycat" blended with Grant Wood's famous painting "American Gothic."  I'd title my work "The Own and The Pussycat at Home on the Farm" or something to that effect. This oil sketch is about 8 x 11 inches 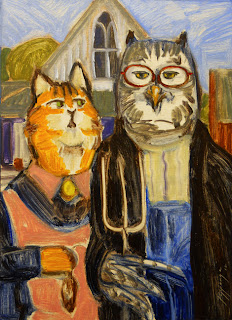 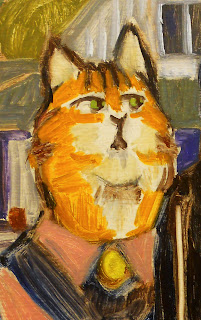 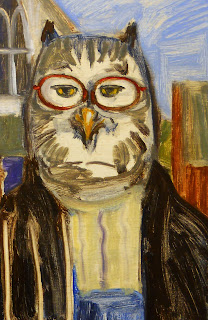