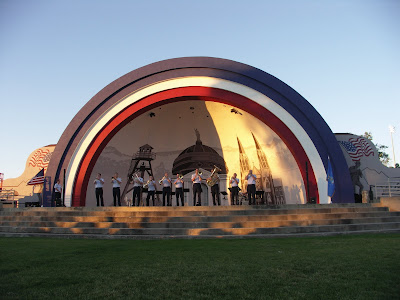 Here's the completed Veterans Memorial Park Band Shell Mural. The RFP called for only a new image in the shell, but I decided to also add in the arches and the wing walls as part of my proposal. It was an amazing transformation of the space to make the former faded dark brown arches over into red-white-&-blue. The band shell now appears larger than it did and it is highly visible from across the park and the nearby roadways. In this photo the performers on stage are the US Air Force Brass In Blues. The early evening performance caught the band shell in the setting sunlight cast upon the historic cathedral image on the right side of the shell.
Posted by C S Poppenga at 10:33 PM No comments: 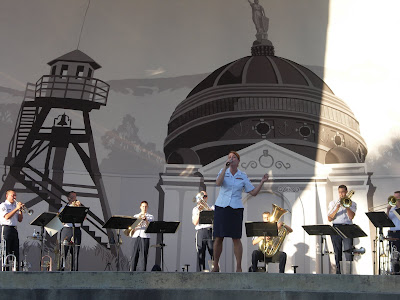 USAF Brass In Blues performance on stage in front of the newly completed band shell mural. The band was great and the singer was fantastic! The performance was a collection of American compositions from Ragtime through the Big Band Era.
Posted by C S Poppenga at 10:21 PM No comments: 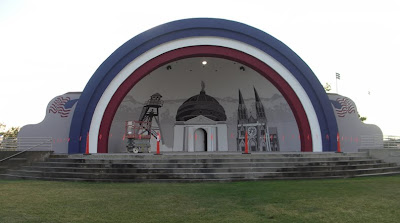 Here is the band shell project at Day Eight of painting (not counting the three days of prep work to get the surface ready.) 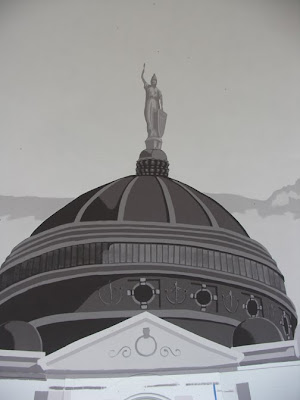 A close-up photo of the capitol dome. The forms are simplified to facilitate "reading" the imagery from a considerable distance across the park and from the surrounding streets---which is what the Call For Proposals specified. 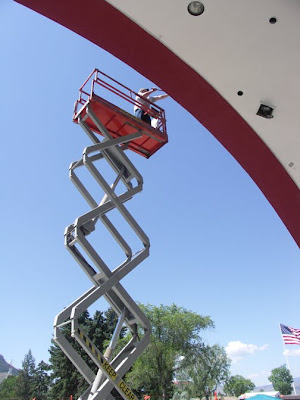 This photo gives some idea of just how big this band shell is. The scissor lift is extended to it's full height so Nathan can reach the outer most arches to apply the blue paint. 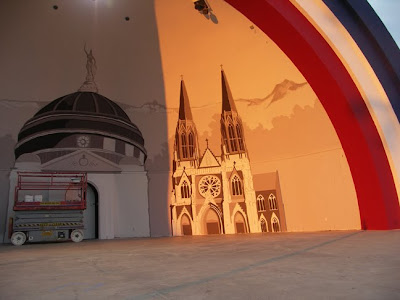 This photo captures the effect of the setting sun on the cathedral image in the band shell. Note the capitol dome image in the shadow. In my original proposal for the project, I'd stated that quality of light and its effect on the mural was something I considered when I opted to do the work in a gray scale. I'd also opted for the gray scale because one of the requirements of the project was that the imagery below the band shell wainscot walls be "neutral" so as not to visually interfere with performers on stage. The cathedral image was not completed as of this photo.
Posted by C S Poppenga at 2:30 PM No comments: