The current 3-D project at my studio is a fiberglass Bison for the City of Custer, South Dakota. The purpose of the project is not to create a "real Bison" look but rather to create a painting of any theme desired. My concept is to suggest a prairie landscape/skyscape that will show a thunderstorm passing over, with a lightning strike/fire at the horizon. The large thunderhead will flow over the area that is the Bison's hump/neck.head. On one flank the prairie will portray a Bison herd in the middle ground and native grasses/flowers in the foreground (up the Bison's legs.) On the opposite flank side a wheat harvest operation is trying to beat the storm and cultivated wheat is in the foreground.
I've posted a photo of the Fiberglass Bison and some photos of the first stage in the painting process. For those interested, I am using Golden Acrylics with GAC 200 hardener added and applying it with a soft brush. 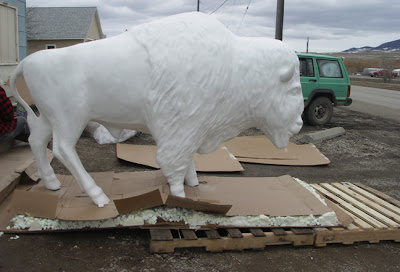 Photo above is the Bison just before taking it into my studio. I'd visited the manufacturer's website prior to being selected for the project and got the dimensions, so I knew it would easily fit through the door. I didn't have to take the door off the hinges either. The manufacturer says this is a life-size Bison. Well, maybe a life-size Bison yearling calf. I've seen and drawn real bison up close, both at the Calgary Zoo (Alberta) and at the American Prairie Foundation's prairie preserve (northeast of Lewistown, Montana.) Couple other things I noticed about this fiberglass Bison is that it has no ears and no testicles. His (Hers? Its?) front hooves are not splayed at all and are small even for the size of the Bison.
Oh well. I'm not painting it to make it look like a real Bison, so those are probably "minor" details in the larger scheme of things.
The photos below show the first stage of painting. More in-progress photos will be posted as my time allows. 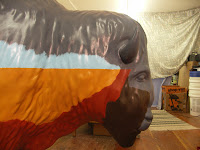 RIGHT - Five color bands base coats for Thunderhead/storm; Sky; Prairie & Wheat; Soil (reddish brown - symbolizes portion of earth that contains remains of all that's been and nourishes all that is); and Deep Earth that reaches beyond what Native Americans typically refer to as "Time Immemorial." 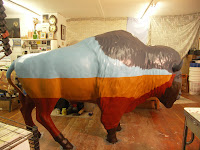 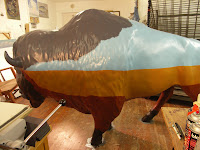 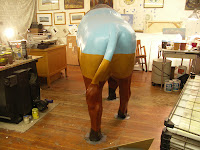 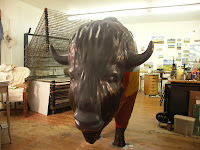 Spring is getting closer. . .

Even though the calendar indicates it is officially "spring", the actual weather here has been more winter than spring. Every night I still have to bring all my art supplies in from the car and then re-load them all in the morning before I leave to teach at whatever school I'm scheduled for on any particular day. Today the school was in Winifred, a small town about 50 miles north of my studio. The day was sunny with lots of interesting clouds and plenty of gentle winds. Here's a panoramic photo taken from the road on the return home around 5 p.m. and about halfway home to Lewistown.:

Click on the photo to see a much larger version. The mountains in the far distance (toward the middle of the horizon) are the Big Snowies (which are just south of Lewistown) and the mountains that start at the left are the Judiths. The mountains to the left of center are the south Moccasins.
Posted by C S Poppenga at 9:29 PM No comments: