The City of Idaho Falls, Idaho sent out a Call To Artists last spring (2010) for bench designs; the selected benches would be installed in the City's Snake River Greenbelt Park. I submitted a concept for a "Paper" Airplane Bench. It was among the 20 designs ultimately selected but placed in the group of ten that had to wait for the next funding round.

So now it is spring 2011 and the bench is "taxiing for take-off!"  Metal fabricators on this project are Warden Bourne and Jeff Martin, both of Lewistown. A big thanks to them for their expertise and abilities to modify a design as needed! I totally trust their work!  Shane Ruckman (also of Lewistown) will apply the finish coat of industrial polyurethane, hopefully within the next week.

Below is a photo taken just this evening of the bench in the back of Warden's flatbed truck. I wasn't able to get a better photo because of lighting issues but will post a better photo when I can take one in the daylight and from a better angle. In this photo, the leading edge is all you can see of the wing:

The three "legs" are going to be coated in a neutral color that will "disappear" visually once the bench is installed. All edges and points are rounded so this bench will be safe for kids to play on.
This was the second time the City of Idaho Falls called for this type of competition. A few years back (in 2005) there was a similar Call To Artists to which I responded and was selected. The bench that time was a skateboard design, which you can see at EastMontProductions (scroll down the page at that website to see it.)

MORE PHOTOS . . . Nice sunshine the day after the evening I shot the photo above. Here are some more photos. Additional photos will be posted after the bench gets its finish coat. 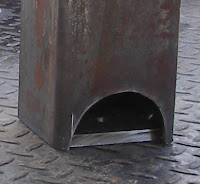 This first small photo (at Left) shows how each of the three support posts hide the bolts. Arched opening allows finger/tool access for tightening or loosening bolts.

The next photo (immediately below) is a nice side view. I cropped out all the extraneous stuff in the background, as everything was about the same color gray as the bench's bare steel and didn't let the profile of the bench show up very well in a smaller sized photo. 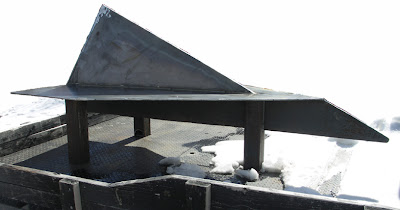 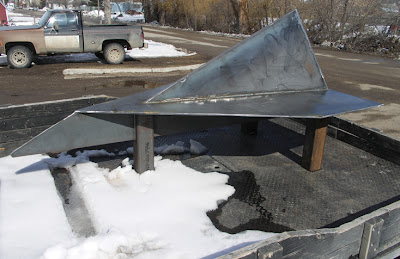 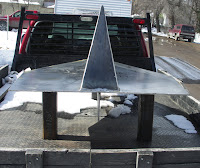 Photo at Left: Vertical stabilizer presents a flat panel rather than an open space (as a real paper airplane would.) This means no space for small hands to potentially get stuck in. 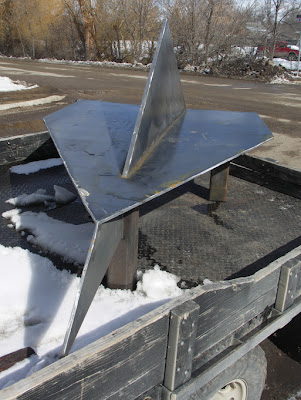 Top view (photo at Right) shows seating surface. This bench gives sitters the option of facing in different directions yet still have a backrest support. 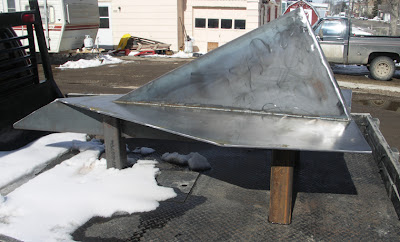 Last photo, another view that shows off the seating surface. Very comfortable! NOTE: Bench is 7 ft long and 4 ft across at the widest spread of the wings. Three 4-inch support posts: One about 2 ft from nose and one under each wing (and each set at 1 ft from rear edge of wing and 7 inches from side edge of wing.) Distance between front and rear support posts is about 3 ft.  Approximate distance between front post support and rear support posts is 3 ft.
Posted by C S Poppenga at 9:39 PM No comments:

Check this video out! Theo Jansen has assembled an amazing kinetic sculpture. The smoothness of movement makes me think of centipede and millipede insects scurrying sideways across a floor. Click: http://www.youtube.com/watch?feature=player_embedded&v=HSKyHmjyrkA
Posted by C S Poppenga at 8:39 AM 1 comment:

He's big and he's blue. He's a teary-eyed personification of that Elvis tune "You Ain't Nothin' But A Hound Dog (Cryin' All The Time)"  This was a fun project and I learned more about fiberglass than I thought I would ever need or want to know. "Mr Snuffles" is one of many artist-decorated fiberglass dogs and cats that will be auctioned to the highest bidder at an event to help raise needed funds for OFSA (Oregon Friends of Shelter Animals) a no-kill shelter in Beaverton, Oregon.
I was pleased with how this "critter" turned out. My only disappointment was not being able to affix the blue suede shoes onto the doggie's big fat fiberglass feet. The vest is a type of suede and I think the color is pretty against the doggie's blue body. (The vest is a dusty rose kinda color --- it may not show true to hue on the web but enough to give some idea of what the effect was..) The vest material co-operated and I was able to glue it into place. Then I added faux buttons to the vest back and music notes to the sides. The paint is artist's quality acrylic and sealed with a clear acrylic varnish in a mat finish (low gloss.) 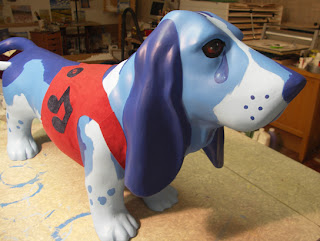 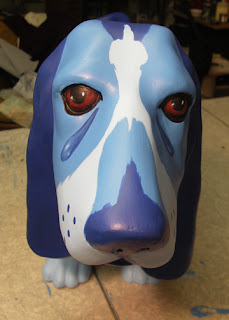 Such sad eyes!
But he won't be so lonely and blue for long!
On Saturday, March 5th this life-sized hound dog
will go home with the highest bidder
and helping to raise funds
for OFSA.
When I get the rest of my photos sorted, I'll post a couple more views. What a cutie!
Posted by C S Poppenga at 7:52 PM 1 comment: