The cat as subject is really taking off in the studio. Fun to take on something new and I plan to follow it as far as it wants to go. Some works are or will be of specific cats and some invented. But Neko will be sprinkled throughout (scroll down the column at right to see a photo of Neko when she was just a "pup".)

So here's a small (4 by 5 inch) oil sketch of something Neko is good at doing -- swiping goodies from the table! I've titled it "Gotta Have It."

The actual incident that inspired this little painting happened a few months ago during a breakfast. Neko decided to "see" my jellied toast with her paw. I remember just catching, out of the corner of my eye, Neko's sideways head tilt and then WHAP! I don't think I actually saw her paw hit my toast - she was lightning fast! A flash and then she was licking plum jam from between her toes.

In this quick oil sketch I simplified everything and focused on the head tilt that cats do when they are eye-balling something they want to grab on the sly. Tail straight out for counterbalance and a paw on the table cloth just in case. Instead of toast, I show a pancake topped with whip cream and cherry because it "reads" better in a painting this small. 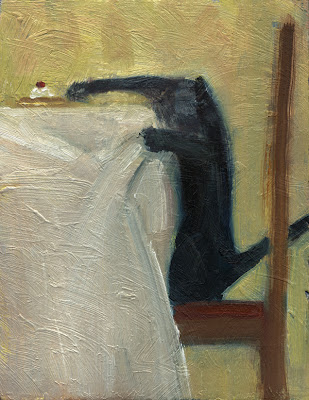 Below is a close up of the "action" - keep in mind when you click on it that you're seeing it significantly larger than the actual work. 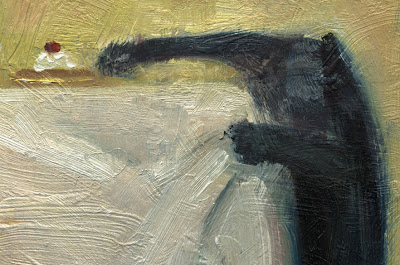 "Gotta Have It" is painted on a wood panel. It's probably birch (most of my panels are) but I'm not totally certain as I had painted on it some time ago (a landscape sketch.) The prior painted surface is what gives this work some of it's accidental texture. I used a number four filbert hog bristle brush and manipulate it in anyway I can to get the marks I want. I don't worry about placing every stroke just right when I work like this.
Posted by C S Poppenga at 2:28 AM