It's been a while since my last post here -- which means I've been busy in the studio. One of my special projects is the subject of this post: A handsome orange tabby named Clark Kent. He is a rescued cat from the streets of Philadelphia, where he'd been tossed and left to die in a miserable and painful state. Nursed back to as good a health as possible, he now lives in a loving home where he'll be well cared for by his human "mom." I read about him on Modern Cat Magazine's online Cover Cat Contest (and have been voting for him as much as possible.) From the information/comments on Modern Cat, I read the articles about his rescue and then also discovered he has a Facebook page too! I'll put links at the end of this post for those who want to know more about Clark Kent (nicknamed Clark.)

Clark's story reminded me of an incident I experienced as a small child, visiting Philadelphia with my parents. Sitting in the car, waiting for my parents to return and watching the pouring rain. I spotted a very wet and distressed orange tabby near the curb. It was all balled up on itself, the way cats do when they are trying very hard to not get wet and have no shelter to go to. As I watched, a youth and two adults passed by and the youth kicked the cat. The adults were either oblivious or didn't care, and the three continued on until they were out of sight. For days I found myself thinking about that orange cat and how I would have let it snuggle on my warm bed and each time my eyes welled up with tears but I couldn't tell my parents why--or maybe they simply didn't understand. Well, that was a long time ago, but it seemed not so distant when I looked at the photos of Clark and read his story, another orange tabby in Philadelphia.

I decided to paint a portrait of Clark. It's oil on birch panel, 19 1/2  inches high by 21 1/2 inches wide. I haven't titled it yet, though I rather like something along the lines of "Urban Cat and Mouse." I worked towards achieving a "folk art" feel about it because it seems to connect better to the childhood incident I mentioned in the previous paragraph; something not so polished but more sincere and true to the basic feelings involved.

As soon as this painting is dry enough to ship safely, it will find it's home with Clark. I hope Clark approves.
Click on the photos below to see a larger version of each. 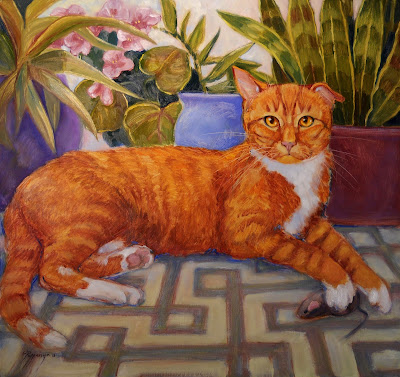 Below: Close-up -- I enjoy painting eyes and especially cat eyes. In this close-up you can see the sketchy quality of line I used to define the darker reddish tones in the fur. 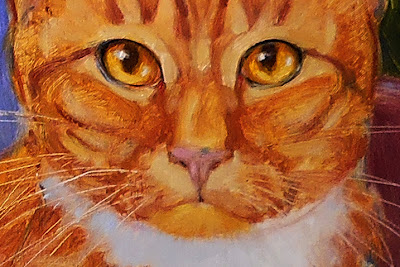 Below: The mouse. One of the photos of Clark on his Facebook page shows him playing with a toy mouse (or at least that's what it looks like -- sometimes it's hard to tell what some cat toys are "suppose" to be.) 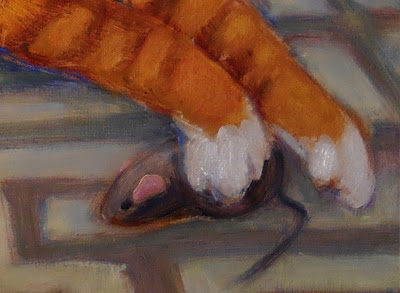 Below: Another detail section showing the sketchy quality of brush strokes in a linear way to suggest the type of fur Clark has. 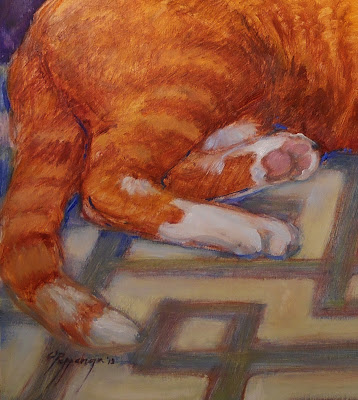 Here are the links to Clark's information at  Modern Cat cover cat contest and the article about his Rescue and his Facebook page
Posted by C S Poppenga at 4:13 AM