This is the last ten miles before Lewistown (photo above.) Actually, less than ten at this point. It is one of my favorite "road views" The Big Snowies are  on the horizon, the road is bare and dry. The usual amount of "quitin' time" traffic and a freshly brewed (in the car) cup of ginger/lemon tea on the console.

Another photo (below) of today's drive home, taken just at the top of the Arrow Creek Canyon (with, at that point, more than half the drive remaining.) I almost always stop at this field entrance to take photos of the Highwood Mountains and Square Butte, but today I turned the camera to the southwest and captured the late afternoon winter sun and the Big Belt Mountains on the horizon. 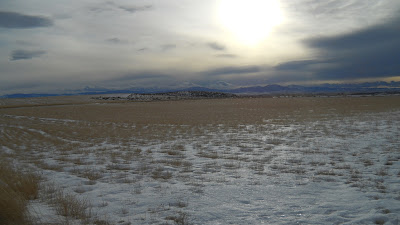 Over most of the climb up Arrow Creek Canyon, I got to share the road with some big boys coming down (photo below.) Perhaps a half dozen of these rigs and their multiple advance and rear guard vehicles passed me. I didn't get a very good look at what they were hauling except that all carried an identical load. Perhaps it is something headed for the Canada oil fields. 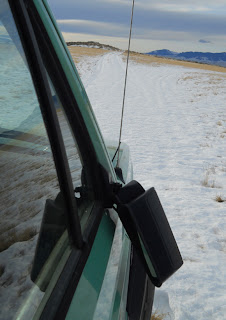 And today's drive was not entirely all peaceful and idylic. On the morning leg, a large cock ringneck pheasant made a bad decision and the jeep's passenger side mirror caught the bird. It sounded like something far larger than the bird hit. Had I not seen the pheasant, I would have thought a deer had run into the side of the vehicle. What a loud bang! I was doing 65 mpg. The mirror is designed to "give" and that's exactly what it did (which is cool for this is a 1996 jeep.)﻿ The mirror and its housing and manual cable controls were undamaged. Only one little piece on the part mounted to the door actually broke. With that and some assembly, it will be as good as "new" (which is to say, as new as a nearly 20 year old vehicle can be.)