So, how much snow? 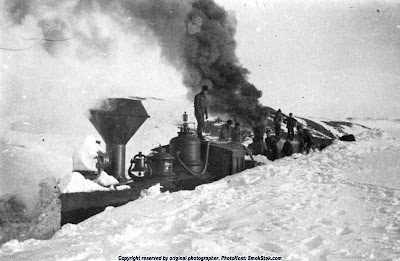 Some years are big on snow. Some are not. And 1909 was pretty big. Here's an interesting photo I came across that shows a steam locomotive "stuck real good" in the winter of 1909. It is located somewhere along the run between Lewistown and Buffalo-Judith Gap area (immediately west of Lewistown.) In 1994, when I was the Home & Family Editor of the Lewistown News Argus, I interviewed Red Hanley. Red had worked as an engineer and he told me an interesting story about how he got a steam locomotive stuck in snow along the same run as in the photo. But, unlike this train, Red's was pushing a weighted boxcar with a plow in front instead of just a plow. As I recall, he told me he'd been advised to "give it as much speed as possible" --- he did and the train went pow! right into the snow drift---in, in, in, in, ...in...........in.............in............in.......and then it stopped. It was buried at least as deep as the one in this photo, or maybe more.
﻿
Posted by C S Poppenga at 12:18 AM